“Truth really can be stranger than fiction – and more fascinating too.”
— The Daily Telegraph 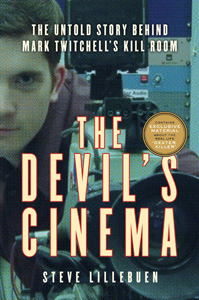 About the Book
On the night of October 10, 2008, Johnny Altinger, 38 and single, was heading to his first date with a woman he had met online.

Soon after, Johnny’s friends received strange emails and computer messages from him, boasting of his new girlfriend and her plans to treat him to an extended tropical holiday.

“I’ve got a one way ticket to heaven,” he wrote, “and I’m never coming back.”

He was never seen again.

His horror story featured a serial killer who impersonates women on an online dating site to lure unsuspecting men to his suburban kill room.

But was his script actually the blueprint for a real-life murder?

And what of Twitchell’s other writings, including the elaborate and shocking document titled S. K. Confessions? Was it a diary detailing his dark transformation into a would-be serial killer?

Combining sharp journalistic insight, years of meticulous research, and a powerfully gripping narrative, The Devil’s Cinema is the definitive account of the notorious “Dexter Killer,” a case and trial that captured the world’s attention.

Author Steve Lillebuen takes us deep into the extraordinary police investigation and the lives of everyone involved, while unveiling never-before-revealed details, all drawn from extensive and exclusive interviews — including a year of contact with the killer himself.

Moving from the police station to the courtroom, from the surface calm of suburbia to the surreal glamour of Hollywood, The Devil’s Cinema is a compelling, multi-faceted story of dangerous obsessions pushed to extremes.

“Fascinating and detailed. … A terrifying and intriguing account of murder in the digital age.”
— Winnipeg Free Press

“Compelling insight. … [Lillebuen] can stand proudly alongside the best journalists in the world.”
— Herald Sun

“A smoothly organized, momentum-building police procedural. … Lillebuen briskly covers just how plodding and paper-trailed a murder investigation has to be.”
— Vue Weekly

“Lillebuen excels at weaving detail into the larger picture in pursuing his larger goal – understanding the man who committed murder.”
— St. Albert Gazette

“It is the insight into the killer’s personality, the perspective of the victim’s friends, and the unfolding of the police investigation and court case that makes this read more than simply true crime reportage. … The skill of the author makes it hard to put down.”
— Newcastle Herald

“Lillebuen does an admirable job in pulling together a story that has more real-life twists and turns than anything famed director Alfred Hitchcock could have applied to the silver screen.”
— Wetaskiwin Times

“Lillebuen … should be proud of his work. The book is being heralded – including by police – as fair, factual and careful not to re-victimize. It’s not a piece of tabloid journalism, or an opinion … but an attempt to carefully tell an Edmonton story involving psychopathy and the increasingly easy-to-smudge lines between invented and real in the Internet age.”
— Edmonton Journal

“Exhaustive research helped produce the compelling true crime tome that is The Devil’s Cinema. Despite knowing how the story pans out, it’s a surprisingly suspenseful read.”
— Fast Forward Weekly